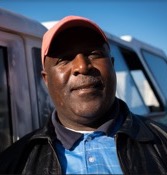 ‘Mac’ joined is amongst the  senior members of Mzantsi Wakho. He joined early in 2016 after shifting gears from his career as a technician. Mac is originally from East London and the team continuously benefits from his expert knowledge of getting his way around in the Eastern Cape. Mac enjoys being part of the team and appreciates that his job inherently very social – he likes to spend time with his colleagues but also learn about the participant’s lifestyles.